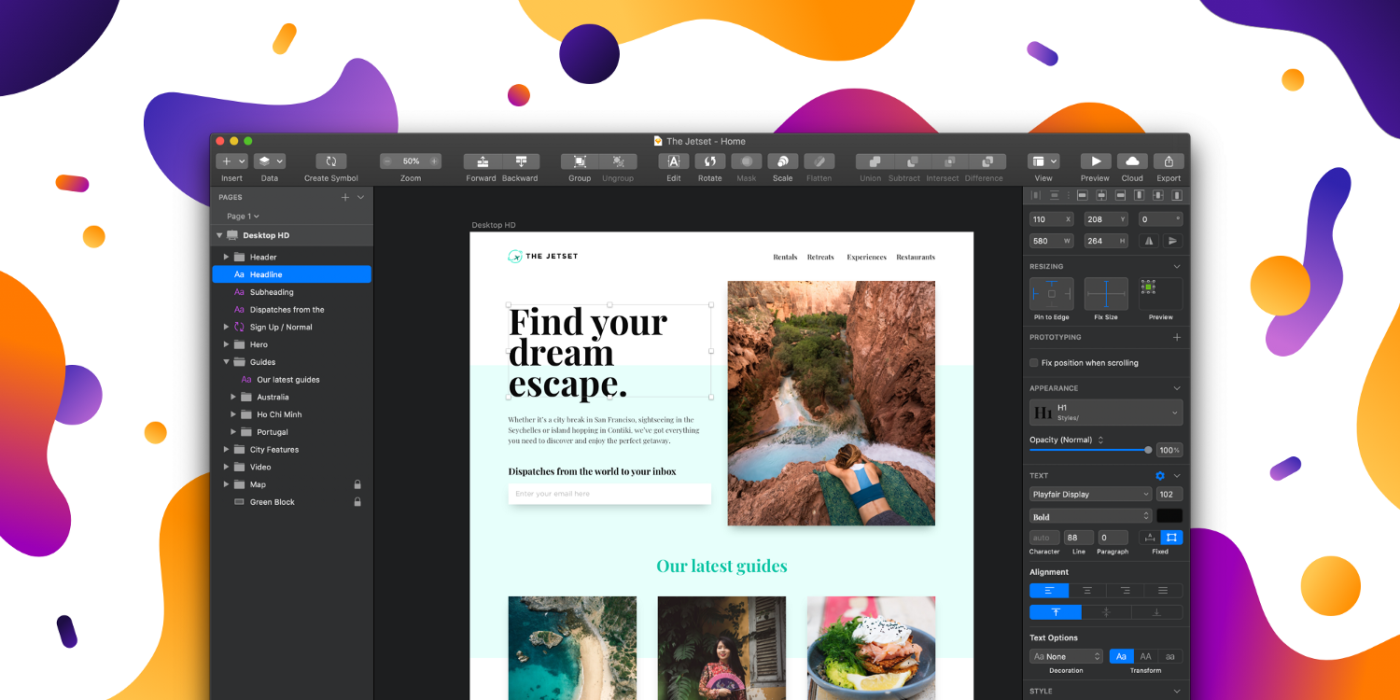 Sketch 52 has landed and it’s one of our biggest updates yet. Jam-packed full of exciting new features, including a totally redesigned interface, this latest release truly reflects the future of Sketch and design. Here’s an overview of all the new features in Sketch 52:

Find your focus with Dark Mode on macOS Mojave

We’re starting with a feature we know you’re already excited about. We announced Dark Mode back in June and the response was huge so we know you’ve been waiting with bated breath ever since.

Following the popularity of plugins like the brilliant Midnight, it was clear to us that Dark Mode was a feature high on many designers’ lists. Apple’s announcement, at WWDC, of a system wide dark mode in Mojave, was welcome news as we’d already been working hard to get Sketch “Dark Mode ready” and, with the release of Sketch 52, it’s here.

With Dark Mode in Sketch, you can lose the distractions and focus on the thing that matters most — your work. Watch your designs come to life against a gorgeous, new, dark interface, and give your eyes a rest when you’re putting in some late night hours on your next project.

In line with Apple’s own guidelines, we’ve kept things clean and simple in Dark Mode with limited use of color and clear iconography. You’ll also notice that the Canvas stays white, until you draw an Artboard, so you can always see what you’re working on, whatever your workflow.

As well as supporting native Dark Mode, Sketch 52 also supports Mojave’s new Accent and Highlight colors. Highlighted UI elements in the Layer List, Inspector and elsewhere in the app will now match your system-wide preferences so if you’re not a fan of blue, we’ve got you covered.

Right now, Sketch’s Dark Mode is linked to your System Preferences so it’s only activated when you switch on the system-wide Dark Appearance in Mojave. Don’t worry though, we’ve got plans to bring an in-app preference to Sketch very soon, so you can hit the lights whenever you want to.

We know you’re as excited as we are about Dark Mode but that’s only the tip of the iceberg in Sketch 52.

A fresh new look for the future of design

The latest version of Sketch brings with it a totally redesigned interface, built with usability, legibility and your workflow in mind. With a clean, new Layer List, a totally overhauled Inspector and brand new iconography, Sketch 52 is continuing to pave the way for the future of design.

As part of the Layer List redesign we’ve implemented a powerful new filtering system. You can now choose to filter layers by type, letting you view only shape, text, image, group, slice, Prototyping or Symbol layers, as well as any combination of layer types. You can also still filter layers using keywords, just like you used to. Changes to the Layer List also include sticky Artboard titles so you can always tell where you are, even when you’re scrolling through endless layers.

The Inspector has been completely redesigned to improve readability and speed up your workflow. Highlights include inline text and border settings, inline HEX value for solid fills, export previews on exportable layers, more information when selecting multiple layer types and a new resizing preview. We’ve also added collapsible sections, so the only information on screen is the information you actually need. Overrides have also received an overhaul and are now much easier to read and navigate.

Last but not least you’ll see we’ve totally redesigned the Toolbar, featuring a set of stunning new icons, a new default order and some nifty little details like grouped tools. Just like before, the Toolbar is totally customizable so you can have easy access to the tools and features that suit your workflow best, and if you’ve ever created a custom Toolbar before, Sketch will remember your preferences in 52.

As well as a new look, we’ve been making some big changes under the hood. Now running on Metal and with a brand new tiling system for the Canvas, Sketch performs better than ever when moving, resizing and manipulating layers in a large or complex document — up to 2.7x faster than Sketch 51!

How to animate prototypes in Adobe Xd

We Get the most out of our

Protecting your business by being online

How to create a good landing page?

How to create fixed position items in

Why We Need Wireframes in Projects?

XD for Jira Integration 2.0, a New